The problem with film school is that, once you go, everything you watch takes on meaning. You spend years talking about how Indiana Jones is an ode to imperialism or how Talented Mr. Ripley is a story of repressed homosexuality or how The Honeymooners was a problematic love letter to domestic abuse.

So everything you watch becomes something to unpack. Sometimes you feel crazy and think, “That Snuggles bear isn’t a representation of commodifying childlike innocence, it’s detergent.” Other times you think, “Wow, the use of burgundy in this movie really does seem intentional.”

What also doesn’t help me is I inexplicably have a seemingly photographic recall of every cartoon and show I watch as a kid, so I oftentimes spend way too much time interpreting in hindsight. Such was the case when I heard some news about the new My Little Pony franchise resurrecting the villain from the 80s era of ponies, The Smooze.

What is The Smooze? Well, it is the lynchpin of the 1986 feature-length cartoon The My Little Pony Movie, which somehow managed to wrangle voice talent like Chloris Leachman, Madeline Khan, Danny DeVito, and Rhea Pearlman for a story that is, at best, nonsensical and, at worse, a deeply problematic commentary on the fetishization of girlhood. Before we dig too deep on deeper meanings, let’s just run through the plot of this cartoon.

An array of My Little Ponies live in Ponyland. There are full grown ponies, unicorns, baby ponies, and a series of pony sidekicks like Spike, a baby dragon whose origin and purpose for being the lone dude living in Ponyland goes completely unexplained, and a fleet of Tribble-esque furballs called Bushwoolies. 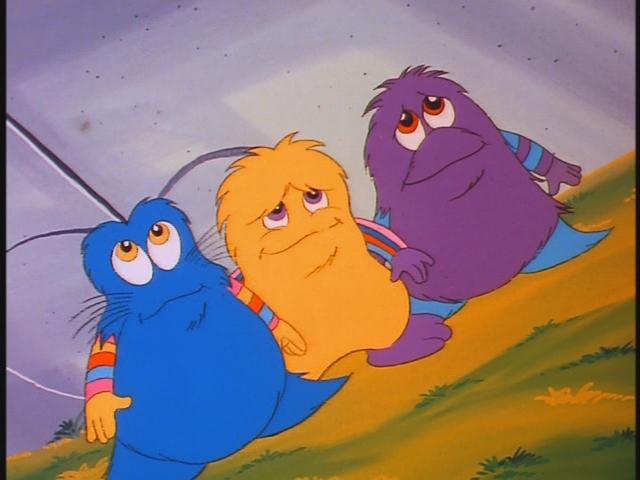 Meanwhile, Ponyland-adjacent, an ugly old witch named Hydia and her two homely daughters, one tall and gangly, the other short and pudgy, complain about how the ponies have ruined the neighborhood with their cheer and their singing and the fact that even the adult ones talk in a baby talk voice that even your regular, non-witch human would find grating. So, Hydia decides it is time to wipe out Ponyland. So, she turns the molten lava moat surrounding their abode into The Smooze. 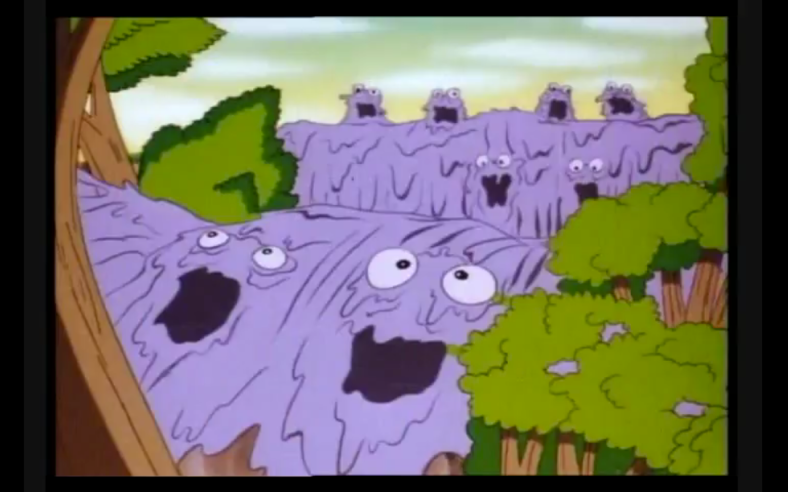 For you see, The Smooze is way more frightening than burning alive in a river rush of liquid hot magma because if this semi-solid purple sludge gets on you, you are condemned to a life of being in a really bitchy, pissy, irritable mood.

The ponies divide their resources between hunting down Baby Licketysplit and trying to stop The Smooze from blanketing the land with tactics like their magical Rainbow of Light and employing a series of flying ponies with delicate, dragonfly-esque wings called Flutter Ponies, who manage to beat The Smooze back with the wind power of flapping their wings.

Meanwhile Baby Licketysplit employ the help of a kingdom of troll like critters ruled by a dude named I shit you not, The Grundle King.

With the help of Grundles, the Flutter Ponies, and the Rainbow of Light, the ponies manage to defeat The Smooze and send Hydia and daughters running, so the ponies burst into song and live happily ever after.

Okay. Now, let’s get down to the question I have to ask: This movie is a metaphor about menstruation, right? Child-like little girl ponies attached by envious, ugly older women who think the way more frightening weapon than the volcanic lava easily at their disposal is to send oozing sludge that puts these ponies in a really grumpy mood. Yup, this sounds like the first visit from Aunt Flo.

And for reasons I don’t understand, the new era of My Little Ponies, who already has to deal with the masses of Bronies fetishizing this girly, ultra-feminine, baby talking bonanza, decides that this villain is so very frightening, it deserves a reboot.

I wish this was just me overthinking it, but even if you don’t buy the period angle, you do have to worry that these baby horses continue to sell little girls on the idea that being a grown up woman is a fate worse than death. Thing is, I loved those ponies, so hopefully the girls of My Little Pony 2.0 realize that a little fun and fantasy is good, but when it comes to their lives, aspiring for big girl dreams is way, way better.

After all, Nothing Can Stop The Smooze.