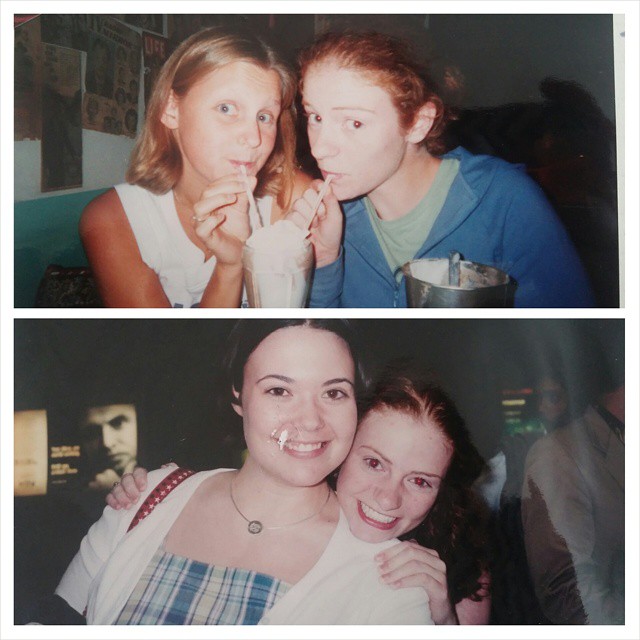 #tbt to two of my favorites who are both brand-new moms, @jennylewis24 and@suzureau. I love and miss both of you!

There were good things and bad things about working the reception desk at a Hollywood management firm. You have to deal with the constant ringing of phones, but you get to pass along the problems that come with those phone calls to assistants. You get to meet all the clients, as they have to get through you in order to get to the people they need. That’s fun. Being Los Angeles and the entertainment industry, even the delivery people are more attractive than you. That’s not as fun.

The best part is the walk-ins though. We were listed in all the entertainment directories, so oftentimes people would walk in off the street to try and solicit reprensentation. We would get tons of fan mail for the actors we represented too. I wonder if this day and age people still send fan mail via snail mail, but that is neither here nor there.

Our offices were located on the second floor of a three floor building we shared with a dentist and some sort of office, maybe casting? We all shared a courtyard with a communal elevator. The elevator opened up on one end of the courtyard, and from my desk I could see out the glass doors that someone was headed our way.

Sometimes, that offered me the chance to warn people folks they didn’t want to hear from were on their way. Other times, it gave me 15 precious seconds to primp before Justin Chambers from Grey’s Anatomy walked in. Then there was the time I had 15 seconds to process that Jaws was coming straight towards me.

I didn’t know him as Jaws at the time. I immediately recognized him though. It tends to happen when a seven foot tall man with very distinct features steps off an elevator. People just say to themselves, “Hey, that is the guy with the nail gun nail in his head from Happy Gilmore.”

You may know him as Jaws from the James Bond movies or by his real name, Richard Kiel. Either way, he lumbered off the elevator, then had to walk with his head ducked, as he was too tall for the patio walkway. He ducked his head even deeper to walk through our front door, then approached my desk.

He did not. He left before I even joined the company, but it was a mistake people made all the time. I explained he was no longer with the company, so Kiel explained what his purpose was.

But first, he dropped a paper wrapped package on my desk with a thud that had me immediately jumping to the conclusion a human head was inside it. I braced myself, fearing what was coming.

Turns out Kiel’s mission was an innocuous one. He was a big James Dean fan and trying to fundraise to get a nonprofit performing arts center built in his name. In order to drum up interest, he brought a brick.

But not just any brick.

He unwrapped the paper package to reveal a brick certified to be from James Dean’s high school in Marion, Indiana. It had papers to prove it and everything, though I do wonder how one certifies a brick. He asked if there might be any talent on our roster that would possibly be interested in donating. I suggested a couple of names on our top talent manager’s roster. Kiel responded enthusiastically, as he was quite the Ted Danson fan, and suggested speaking to his manager.

“I’ll leave the brick with you,” he said with a smile. He then thanked me again, smiled the friendliest smile as he shook my hand, and left, off to deliver another brick to another building. I smiled to myself, both at the gentleness of his demeanor and at the absurdity of the situation.

I IMed my boss:

While I waited for her to respond, another manager came in and saw the brick.

“You building a house?”

I explained the story, and he became super intrigued, offering to take the brick to the top manager’s office, clearly intent on presenting it as a brick he discovered specifically for a special client. As he did, my boss appeared in the doorway.

“Drop the brick,” she barked.

For the next three months, it was a back and forth battle of brick thievery in our office that was my favorite thing to kepe me sane in an otherwise high stress position. There were ransom letters, undercover after hours operations, and the kind of hijinks straight out of a James Bond movie.

so, when I heard Kiel passed away today, my mind immediately went to nail guns and bricks, two of my saving graces when trying to tackle the wild world of Hollywood.

The problem with going to movies on first dates is you run a risk of seeing something terrible. Especially if that first date is in September, a time generally known as a movie wasteland.

So, that is how eight years ago I went on a date and ended up seeing a movie about a guy who is a cheater. Yeah, that kind of cheater. Not the “oh let me copy your math homework” variety. The “I boink other girls” variety. So yeah…It was a little awkward.

I don’t know if it is because I was so concerned with the date going well or because the movie legitimately wasn’t up my alley, but I left the theater with a less than stellar opinion of the 2006 movie “The Last Kiss”.  To me, the movie seemed relatively pointless. Why would I want to watch Zach Braff cheat on his lovely girlfriend (played by Jacinda Barrett of Real World London fame) to go run around with a child in college played by Rachel Bilson? What was the point of this? Was I supposed to sympathize with this greedy dude taking advantage of young impressionable girls?

At the time, I was about to turn 23. My date was a couple of years older, and, at the time, I was still too young and naïve to realize he was just one of many guys I was going to encounter in the next eight years who was scared to death of settling into anything.

You can credit growing old, I suppose. Working around the notoriously unsettled poker community probably deserves some credit too.  Either way, what I didn’t know then is a lesson I have learned in spades now: The Zach Braff character isn’t a horrible person—he’s just a guy nearing 30 who is absolutely petrified that he may commit to something that isn’t what he wants.

Upon rewatching this movie on a whim a couple of weeks ago, I suddenly felt like I was being educated, not irritated. To hear Braff’s character talk to his friends about why he can’t commit to marrying his girlfriend even though he is having a baby with her didn’t seem as whiny as it did that first time around.  I mean, as a female who doesn’t have commitment issues, I am on the girlfriend’s side here, but I also began to comprehend just why this situation that seems so unassuming to me can be so frightening to guys. The scenes in which Braff and his collection of male friends interacted felt like a glimpse inside the minds of the dudes who had baffled me the past eight years. Oh, I thought. Finally someone is articulating what these guys could never quite say.

But, much like Sex and the City, I wonder how much I misunderstood the movie as opposed to how much I have changed over the years. The way I viewed the “other woman” character makes me think this movie isn’t necessarily aging well, it is more that my age is giving me a better perspective to appreciate it.  Originally, I felt terrible for the Bilson character, a seemingly naïve college student who believed this man really cared about her, believed he was leaving his girlfriend, and believed she wasn’t doing anything that bad.

On the second viewing though, I basically found her to be Darth Vader. Just completely evil. This girl was scheming, conniving, manipulative, and freaking dangerous.  She knew exactly what to say to get her way. She also knew this dude was very much taken and not going to not be taken without her pushing the issue. So, she did all the stuff that gives us girls a bad name. Pretending she is fine with a situation she is not fine with, then acting crazy when she doesn’t get her way.  She was something out of The Hills—a frightening Kristin Cavallari clone who revels in manipulating people and situations.

If you’re reading between the lines here, I am officially a chick in her 30s who realizes how difficult it is to compete with girls in their 20s who learned all those girly lessons Dolores never taught me because Dolores didn’t know a damn thing about how to get a guy to do what she wanted.

If you’re reading between the lines of this whole post, what was an awkward first date in 2006 was a life lesson about why so many of these first dates didn’t pan out over the past eight years. It was some reassurance to us girls that the problem isn’t always that we aren’t good enough. It was a tragedy of why relationships can be so hard. And it was yet another reminder in a recent string of reminders that, as I get older, things that used to make no sense at all can suddenly become crystal clear.